In this comprehensive review we’ll cover:

So if you’ve been on the prowl for a small, lightweight and very inexpensive inflatable tent, you’ll love this guide.

Bottom Line: A solid tent for its price, simple and reliable

As one of the last entries on our list, and one of the last tents we tested, our crew had begun to experience some tent fatigue, to be fair. We had just spent a few weeks in the woods, testing and categorizing different tents and gear, and we were starting to miss our beds.

Luckily for us, the Tangkula Inflatable Tent really exceeded our initial expectations, and proved to be the final addition to our top 10 list of best inflatable tents. This little tent really caught our eye, delivering a quick and reliable camping experience, all at an exceptional price.

Along with many of the other inflatables, this tent had a great showing in Ease of Setup, and also held its own in Comfort.

Most impressive, however, was its miniscule weight and ability to pack down into a reasonable size.

Which really outdid most of the other tents on this list.

However, our experience wasn’t completely positive. The tent performed poorly in weather resistance and durability – which do tend to go hand-in-hand. And though this is certainly a bi-product of its excellent price, our camping experience did suffer a bit as a result.

But enough generalities; let’s dig into the specifics!

The Tangkula Inflatable Instant Camping Tent is a compact unit that’s easy to pack and carry with you.
Click to Tweet

The Tangkula Inflatable Tent is a small inflatable geodesic backpacking tent that can reasonably fit two campers. It weighs just 11lbs, coming in as one of our lightest tents on the list.

As for size, this tent measures 87” x 41”, meaning you’ll have a reasonably tight fit unless you’re tent camping solo. The lack of extra space inside the tent can also mean this tent is well suited for solo or duo car camping expeditions.

The tent is inflatable, meaning a pump is required for setup, and air beams are substituted for actual poles.

However, the valve system is fairly simple, meaning an easy setup process.

No one enjoys trying to hold their flashlight in their mouth as they play around with an unwieldy rain fly.

The truth is, your ability to set up a tent can really set the mood for your entire camping trip.

And in the very worst situations, an uncooperative tent can be dangerous or even deadly!

So we take this metric very seriously!

As you can see, this tent performed quite well, despite being only halfway up the list!’

Of course, it was pretty hard to rate all of these wonderful inflatable tents against one another without splitting hairs. And even when we did, most of the inflation systems were similar enough (and good enough) that we rated them highly.

The only reason the Tangkula  Inflatable Tent didn’t take a top spot was its hand-pump, which can take a little longer than the more deluxe, automatic pumps in some of the larger tents.

When you spend a day hiking or swimming, climbing mountains or fishing in the river, there’s nothing better than stretching out in a spacious tent for the night.

On the other hand, uncomfortable camping ranks highly on our list of Worst Things Ever; you want a tent that has plenty of space for you and your gear, as well as good head clearance and other accommodations that help you live like a king!

For a tent as inexpensive as the Tangkula, this ranking is deceptively high. It’s important to keep in mind that most of the tents that rank higher cost much, much more than this little tent.

In all honesty, the Tangkula Inflatable Tent is relatively functionally comfortable, and you really can’t ask much more from a cheap 2-person backpacking tent.

True, fitting two people inside was a bit snug, but we were able to make it work. But we did have to tie our gear up in a tree – there was no room to spare!

Rain, wind, sleet and snow are a lot less intimidating when you have a strong roof over your head.

For this metric, we tested our tents in the elements – and simulated them when the bad weather didn’t cooperate. Each tent is ranked based on how well it withstood strong winds and rains, which are the most common culprits when you’re camping

Unfortunately, this is where the cheapness of the Tangkula Inflatable Tent really reared its head.

We were lucky enough to hit a reasonably-sized rainstorm when we were camped out in the Wasatch, and this little tent didn’t stand a chance.

Though we stayed reasonably dry through the walls, the tent’s floor quickly sweated through and we were left with damp and clammy sleeping bags for the rest of the night. There’s nothing worse than waking up in wet clothes!

On the other hand, the tent performed better in wind than we had expected, handling gusts up to 25 or 30 mph. That alone rescued this tent from standing at the bottom of this list.

Rips, tears, bumps and scrapes – they’re synonymous with camping, and they can really do a number on your tent if it isn’t durable enough.

We tested our tents by putting them through some barbaric tear tests and simulated punctures. We also dropped a heavy tree branch on the canopy, just to see how well it would hold up.

The Tangkula did not hold up. In fact, it finished just below the very bottom-tier, again showcasing its cheaper manufacturing and poor quality.

There wasn’t too much to say about this one; the tent can handle the most basic abuse when camping; small stones and sticks won’t cut through its fabric.

But beyond that, any serious stress will cause the outer fabric to tear, and a heavy tree branch can easily cave in the upper canopy.

Versatility measures how well a tent can be taken on different adventures, from long backpacking treks through the mountains to a campfire in your backyard. For that reason, we make sure to rate lightweight and portable tents higher on the list.

Though we’ve mentioned it a couple of times already, the Tangkula is a very lightweight tent – barely 10 lbs –  and I almost forgot it was in my bag when we hiked out to our first campsite.

As far as pack size is concerned, the tent was a little larger than it potentially could have been, but that wasn’t a dealbreaker for us. The package easily fit into my pack, along with plenty of food and water for a longer hike.

…it might not be completely optimized for multi-day backpacking – especially with its durability issues – we felt pretty confident in our ability to get the tent packed into our bags and carried for at least a few miles through the wilderness.

End of the line, folks. How did the tent do?

Honestly, not as badly as it looks. I’ve said it a couple of other times for other lower-ranked tents on this list, but the general quality for these tents was much higher than usual.

Normally, a ranking of 74 would land a tent in the middle of the pack, and this is honestly where we feel the Tangkula belongs. It is a cheap tent, with few amenities but some serious durability and weather resistance issues.

It generally gets the job done, and it has an excellent weight and very simplified setup process. So if you’re looking for a weekend hike with your friends and you don’t want to shell out the big money for classier inflatable tents like the Heimplanet, this one will be your best option.

So there you have it: another detailed look at one of the best inflatable tents on the market!

While the Tangkula  had some serious drawbacks, it was ultimately a great option for camping on a budget, particularly if you’re doing light backpacking with a friend or solo camping.

The inner tent space was acceptable, there was enough room to squeeze inside under the air beams and have a pretty comfortable night in the process.

As we wrap up, it’s important to remember that there are lots of different types of camping out there, with different tents that suit each style.

While many of our tents on this list fell on the more intense, expensive side, the Tangkula reminds us that camping can be simple and affordable.

As long as you’re having fun and staying safe, you’re doing it right!

So get out there and have some fun in nature! That’s the point, isn’t it?

If you’d like to peruse our Top 3 inflatable tents – See the links below.

We’re handing over the baton to you now to make your choice – enjoy! 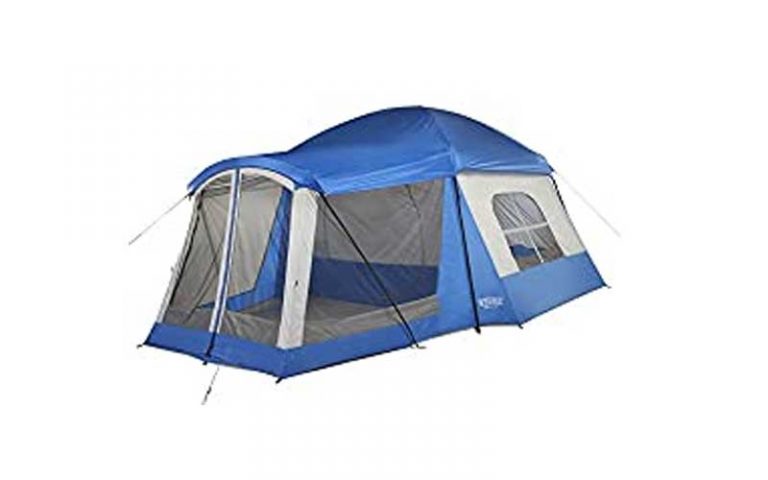